“Good to Know Somebody Cares”

“Good to Know Somebody Cares”

Christmas was coming, and Tanicka was worried that when her kids woke up on that special day, they wouldn’t find much of anything under the tree.

A single mother of three young boys, Tanicka had recently divorced and lost her job. “I was worried I wouldn’t be able to provide my kids with much of a Christmas,” Tanicka says.

But that’s where you came to the rescue.

Tanicka and her boys had landed at MorningStar Mission, where our annual Stars of Hope program brings joy — and gifts — to struggling families. Qualified families submit wish lists for every member of the family. MorningStar supporters shop to fulfill those lists. (Learn more here.)

Tanicka wasn’t sure what to expect when her family turned in their wish lists. But all three boys — and Tanicka herself — received everything they asked for. Tanicka was overwhelmed.

“People don’t have to be that generous,” she says. In addition to the gifts they wanted, the kids also received clothes and shoes they needed. And Tanicka got the winter coat she wished for, plus a few other items.

Though young, Tanicka’s sons knew there were financial struggles, and they asked where the presents had come from. “I told my boys that other people thought of us and wanted to buy these gifts for us, that people worked hard and decided to bless our family.”

Tanicka says it made for a teachable moment — that someday, when they’ve risen above their current circumstances, they can do something similar and bless other families for the holidays.

In the meantime, her family is grateful for your Christmas kindness. “When people land on hard times, it’s good to know somebody cares, even though they don’t even know us,” Tanicka says.

“When I get back on my feet, I will remember where I’ve been, and I want to do this for somebody else. Thank you!”

You can brighten up Christmas for families through your gift. Thank you! 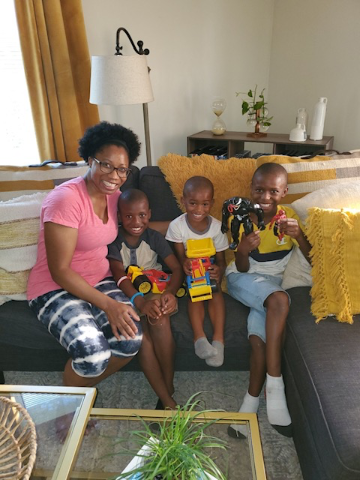 “Homelessness Is a Hard Thing”